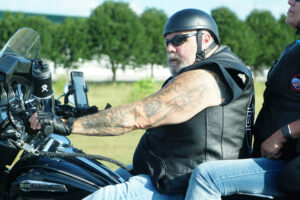 Yesterday morning Jay and I were talking about how to build a website/blogspot for the mission God has called me to, this mission, being a motorcycle missionary. It’s necessary for me to be able to post my thoughts and activities in order for folks to see what’s going on in the mission/ministry so they can prayerfully decide if they will lend support. Jay told me what the expense of the website, domain names, etc would be and it was more than I expected. However, knowing that God has called me to do this work I looked in to my ministry account and there were just enough funds to cover it. Not much more but enough. I told him to do it. A couple hours later I was at my ENT, Doctors office. I’ve had throat issues with 3 surgeries this year. We are making monthly payments to the Dr’s office because of the large amount of money we owe because of the surgeries. After the examination the Doctor showed me the paperwork that had the amount I owed on it. Out of nowhere he shows me the amount, says, “you see that. It’s done, gone, don’t worry anymore about it. I’m wiping it off”. I was caught completely off guard and couldn’t get out of the office quick enough before the tears began streaming down my face. As I got in my car I called my wife to tell her what had taken place and one of her co workers answered. She immediately asked me what was wrong and I told her nothing, that I had received some good news and I wanted to tell my wife.When I got off the phone with my wife her co worker asked what was going on. When my wife explained it all to her she replied, “I think I need to go to church”. God’s plan, His blessing always impacts in multiple ways.

Praise God I just celebrated 14 years of sobriety, 5115 days one day at a…